Consume all the dirt and avoid the slime monsters.  Make it through all the levels.  Web build looks much better in fullscreen.

This game is actually really fun.  I love the controls and the general mechanic of your game

Thanks Onieth.  I enjoyed making this and also had fun testing it. Need to add a few extra/interesting enemies.

Hey, I absolutely love this game, and I think the idea is great. The music fits the game well in my opinion. The controls are quick and nice, but it'd be cool if (because you made it in Unity and it's quite easy to do in Unity), you added animations for the player and enemy, and also added maybe a destroy particle effect when the enemy kills the player.

While I was playing, I thought it might've been cool if the slime monster actually spawned more dirt behind him, because that makes it really hard.

Well done, a great game made in under 70 hours! Best of luck in the palette jam!

Thanks, I loved this one also, yeah another timing thing, maybe I should have cut a level. I was thinking of giving the creature a mouth and have an eating animation. I did think about dirt behind but I thought the later levels already we're quite tough. Thanks for all the feedback. 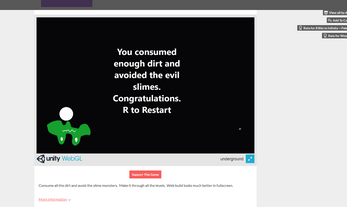