Traverse through Hell, fighting demons in order to rescue your best friend.  As you progress you get weaker.  Can you overcome the fatigue and rescue your friend?

Haha did you seriously write a song for this game? haha. It wasn't bad at all, I wish there was some music to go with it man haha. Also I listened to the guy in the comment section and die at the final boss fight LOL.

So for some serious feedback, I think this is a form of shared resources game, where you have initially 140 points to distribute to your skills, and you have pre-distributed them in a way that is not optimal, so players need to find a way to find that optimality. Great interpretation. and great effort on bringing the game to life, I appreciate it! On the flip side, although I don't mind the art, there could be some animation to add more humor.  The importance of the stats are not explained, such as the difference between attack and damage. Last but not least, the sound effect for the bullet has a long delay before played, so the shoot sound plays when the bullet is half way, this really bugs me for some reason :joy:. But as I said, I appreciate the quirkiness of the game and congratulations on making another LD jam.  I couldn't finish and opted out so.. :D

Yeah initially what was in the comments was the optimal strategy but in the end the best offense is a good defense.  I am happy you just made it to the music.  Yeah really need to get someone to compose some music for my songs.  It is too tough for me to throw some hums in time to not make it seem convoluted.   Yeah, I was going to have particle effects on the hits and should have had his arm move for the shot.  I had all the pieces broken up for the cowboy so I could animate him but I still have not tried my hand enough at animation, something I would love to learn.  I was happy to just have some dancing flames in the background.  Interesting, I guess the delay on the shot is some blank space in the audio file cause it does play on awake.  Yeah, for the most part this was what I was trying to make.  Could things look nicer, of course.  Could enemies do cooler things, yes.  Could there be explanations for abilities, in hind sight that was a big mistake on my part, was going to have a screen for that but I kind of painted myself into a corner using a lot of don't destroy on load things.

Yeah that is definitely the delay in audio file. I had that problem before too, and when it comes to things that you do a lot, like jumping or shooting, the smallest delay could throw players off. Yeah I noticed the dancing flames, it was cool. Otherwise you can just have the image sort of wiggle its way out instead of putting on an animation. That'd add a bit extra life to it :D.

If you choose sacrifice, there is fun animation for your soul squirming back and forth.

If you trade all you hp for attack, damage and speed you become and unstoppable machine gun ⊂(▀¯▀⊂)

Yeah that is sort of the point, need to put the boss in. Might tweak some of the enemies stats 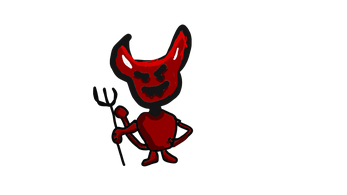 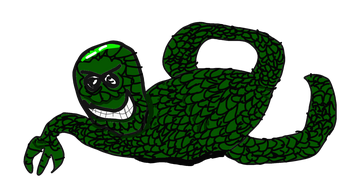 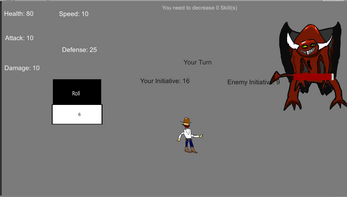