Move left and right with left and right arrow or a and d.  Rotate the world with up and down, w and s.  Not every level will need/allow world rotation.  Solve each puzzle.

Interesting concept. Got to the dollar question. How do I submit it? ^_^

Just type in the answer, if at any point you are stuck you should be able to press space to skip

Fun game, couldn't beat the maze level with the key and spikes.

The friction on the player leads to some odd behavior, but it seems like the levels were designed with it in mind. Overall I liked the controls, though the rotation seemed slow to start, would have been nice to have it be a consistent rotation speed.

Just uploaded a new version with 10 more levels and the rotation is nicer.

Funny, hard in a good way. I like it. But

- there is a problem with physics. When I rotate the rotatables they behave like they have mass, less then the player's. The player can push obstacles. It feels ugly(if it's not part of the gameplay).

- there is another problem with physics. The player can climb the obstacles. It's caused by the friction which is caused by the force, which moves the player. As we know friction F equals moving force N multiplied by some k

Friction is too high because of two parameters: N & k. If the dev makes them less, friction would be less(maybe not enough).

P. S. I can't do the last level which repeats, because the door doesn't have any collider. Maybe it's because it's a prototype game. 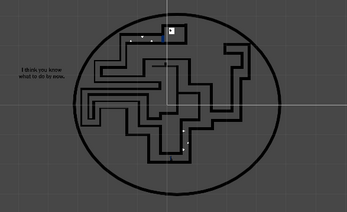